Sea Sick
Written and Performed by Alanna Mitchell
Directed by Franco Boni
Co-Directed by Ravi Jain
Produced by The Theatre Centre
​
…the ocean contains the switch of life. Not land, not the atmosphere. The ocean.
And that switch can be turned off…

Sea Sick, Alanna Mitchell’s critically acclaimed and Dora-nominated production about the state of the global ocean, premiered at The Theatre Centre in 2014 and has since toured around Canada (Calgary, Vancouver, Ottawa, Victoria, Montreal…) and the world. Come and experience this powerful story in which Mitchell uses science and her own delicate wit to tell us about her journey to the bottom of the ocean, the demons she discovered there, and her hope for the future.

Mitchell is an award-winning Canadian journalist and author (New York Times, CBC’s Quirks & Quarks, Globe and Mail, and more) who writes about science and social trends specializing in investigative reporting. Sea Sick is inspired by her international bestseller and award-winning book of the same name.

Praise for Alanna Mitchell’s book Sea Sick: The Global Ocean in Crisis
“Alanna Mitchell has brilliantly woven together the threads of science takig pace all over the world pointing to an accelerating crisis in the world’s oceans…The climate crisis is more an ocean crisis. That she still finds reasons to hope is one reason you must read this book.” – Elizabeth May
“A riveting book of revelations about earth’s largest and most important habitat.” – Australian biologist and author Tim Flannery
“Sea Sick is the most comprehensive book to date on the state of our oceans. With a writer’s eye for detail and a reporter’s expertise in pulling in disparate information, Mitchell has woven a powerful and deeply unsettling story about our collective abuse of the cradle of all life. Fortunately, she also gives us hope and a path forward if we have the wisdom to act.” – Maude Barlow
TURNING SCIENCE INTO ART
by Alanna Mitchell 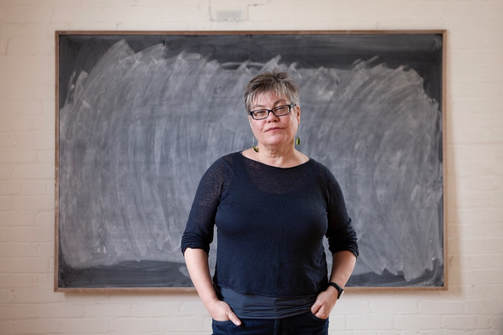 ​So, how do you turn a science book about the ocean into a play? And, more to the point, why?

Well, that part of the story starts three years ago with the first expedition of the North American branch of Cape Farewell, a group inspired by the British visual artist David Buckland. David decided more than a decade ago that scientists knew about climate and ocean change, but that artists didn’t, so he began putting them together. Often in the Arctic. Often on ships. Often stuck in the ice. It was hard to get away. So people talked.
And astonishing stuff started emerging. Music, avant-garde visual art, theatre, literature. After I met David for the first time, I read the British novelist Ian McEwan’s book Solar, the first part of which is based on McEwan’s own ice-fast Arctic adventures with David and others on one of the Cape Farewell journeys. It was hilarious. It was searing. It was all about climate change, slyly inserted into a rollicking good tale about a shady physicist.

So when David invited me to take part in a small North American version of the Artic expedition – which took place, wryly, at the Palais Royal in Toronto overlooking Lake Ontario with a few dozen artists and scientists from all over the continent – I just said yes. Again, a raft of fascinating art has come out of that, culminating last fall with the Carbon 14 show at the Royal Ontario Museum.
But for myself, I wasn’t expecting much. I was at the meeting simply as a source of information for the artists and, on the final morning of the meeting, as the final speaker, I tossed off a short talk about my adventures writing my book Sea Sick. Unbeknownst to me, however, Franco Boni, artistic director of The Theatre Centre, was in the audience.

That’s when it really started to get interesting. Franco got in touch with me a few months later and asked me to give a talk to a bunch of theatre people who were gathering in Toronto for a conference. I remember it was a Sunday morning and I had a couple of other talks to give that afternoon but I really wanted to say yes to Franco and so I did. It turned out it was on a stage in the café in the basement of the Drake Hotel – lights and everything – and I confess perhaps I hammed it up a bit more than I do sometimes.

Well, a few months after that, I hear through Claire Sykes, who runs Cape Farewell in North America, that Franco wants me to turn my book into a one-woman show, with me as the performer. I thought he was crazy, but I met with them at a café on the Danforth. They were convincing. It would all be oral, they said. I would only have to tell my stories the way I usually do, shape it a little bit, maybe fashion a new start and end, and voila! There would be our play.

I said yes. And then began the most difficult journey of my life. For months, Franco and Ravi Jain, the artistic director in residence and I met to talk about why. Why had I written about the ocean? Why had I gone on all those journeys? Why had I become a journalist? Why did the story mean so much to me? Why had I agreed to make a play?

I talked and talked and, because there was a blackboard in the makeshift office we were in, I would leap up from time to time to write stuff on the board, to show Franco and Ravi what I meant. And every time I would explain something, either Franco or Ravi would say: “There’s more.” And I would try again. It was like being enveloped in a world of tough intellect and tougher love. There was no hiding.

Eventually, it all came down to this: Why does art matter?

My hope is that you’ll find some answers in our play. It’s what we grappled with for all those months.
And I came out of it convinced that we won’t find the solutions we need for this high-carbon world we’ve created until we rewrite the story about how it all ends, and rewrite how we feel about that. So ultimately, the answer lies in culture. In emotion and psychology and all the other things that make us uniquely human. In art, that is to say, which has the potential to take us on journeys we could never take any other way.
The play didn’t turn out the way Franco promised, by the way. It is not just oral. At a fateful point in the process, I transcribed the tapes we were making of the play and then, we had a script – all 10,000 words of it – and we starting honing it, making it leaner and clearer. And then – worst thing of all – I had to remember all those words, all in order. Pure hell for a journalist, who’s trained never to tell the story the same way twice!