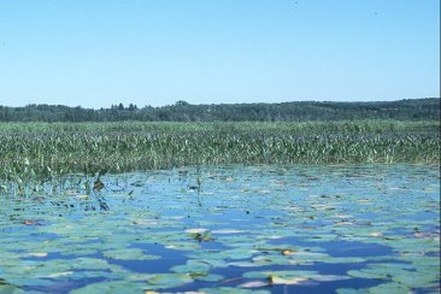 1. MARSHES are found along the shores of rivers and streams and in the shallows of ponds, lakes and sea coasts. They support a variety of floating and emergent plants (plants that are rooted in the soil and grow out of the water such as Cattails and Arrowheads).

Marsh characteristics include:
* periodically or permanently covered with water;
* commonly created by beaver activity
*dominated by emergent plants such as Cattails, rushes and grasses with floating-leaved plants such as Water Lilies or submerged plants such as Coontail.
Plants and animals that might be found in a marsh include: Red-winged Blackbird, Virginia Rail, Raccoon, Muskrat, Water Snake, Bullfrog, Northern Pike, Sunfish, Dragonfly (adult), Dragonfly (nymph), Cattail, Water Lily, Arrowhead, Newt and Coontail.
​ 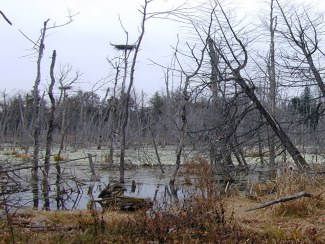 2. SWAMPS are treed wetlands and may be isolated or found along rivers, streams and lakes. They are often formed due to flooding after spring snow melt. Trees such as White Cedar and Balsam Poplar and shrubs like the Lowland Pussy Willow can be found in swamps.
​
Swamp characteristics include:
* 25% cover of trees or 50% cover of tall shrubs
* flooded either seasonally or for long periods of time;
* often flooded in spring, but may be quite dry in summer;
*typical trees found in swamps include Silver Maple, Black Ash, Black Spruce, White Cedar and Tamarack, or tall shrubs such as Willow, Alder and Dogwood.
Plants and animals that might be found in a swamp include: Great Horned Owl, Wood Duck, Pileated Woodpecker, Mosquito, Mink, Garter Snake, Wood Frog, Marsh Marigold and Sensitive Fern. 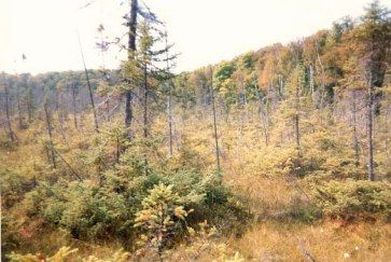 3. BOGS are hummocky wetlands commonly found in northern parts of the province. They are located in deep, bowl-like depressions and are filled with layers of peat (slowly decaying plant material). There is no drainage to let water escape from bogs so they are usually filled with stagnant water. Sphagnum moss, trees such as Black Spruce, and shrubs grow on this spongy base. Bogs are acidic.

​Bog characteristics include:
* peat-filled depressions that receive little surface runoff or ground water from the surrounding soils;
* surface waters are acidic and low in mineral nutrients;
* usually covered with a carpet of Sphagnum mosses, some sedges and shrubs;
* also found are unusual insect-eating plants such as Sundew, Pitcher plant and Bladderwort;
* bogs are rare in southern Ontario. 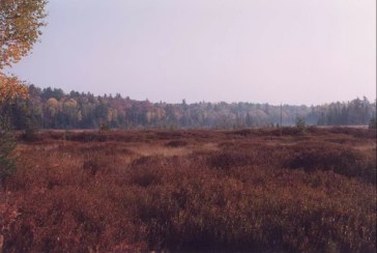 4. FENS, like bogs, are usually located in low-lying areas of northern Ontario. Water slowly flows in and out of these sedge dominated wetlands. A diverse community of sedges, rushes, grasses, low shrubs such Sweet gale and insect-eating plants such as Sundew live in fens. Fens may dry up completely in warm summer months.
Fen characteristics include:
* peatlands located in areas where ground water discharges to the surface;
* vegetation usually consists of sedges, some mosses, grasses, reeds and shrubs;
* unusual insect-eating plants such as Sundew, Pitcher Plant and Bladderwort are found in nutrient-poor fens;
* fens are not common in southern Ontario.
​
Plants and animals that might be found in a fen include: Northern Harrier, Yellow Warbler, Meadow Vole, Snowshoe Hare, Mink Frog, Water Beetle, Damselfly, Sedge, Bog Rosemary, Bog Willow, Buckbean, Flat-leaved Bladderwort, Pitcher Plant, Shrubby Cinquefoil, Showy Lady's Slipper and Grass-of-Parnassus.
Why are wetlands important? Some examples of wetland plants include cattails, water horsetail, arrowheads, water lilies, sundew, mosses and ferns. Sundews are small bog plants that eat insects. The sundew leaves have long hairs with sticky tips. Once an insect is stuck to the hair the leaves fold over to trap the victim and it is eventually digested.
Some examples of insects found in wetlands include stoneflies, water striders, water boatmen, predaceous diving beetles, caddisfly larvae, damselflies, dragonflies, whirligig beetles, mosquito larvae, water tigers (diving beetle larvae) and dragonfly nymphs.

Threats to Wetlands
In the past, wetlands were drained, dredged and filled to create fertile crop land. Today, wetlands still are being destroyed to expand agricultural land, for building developments, cottages and road construction.
Peat harvesting destroys many bogs and fens. Peat is harvested and used as a fuel source, for improving soils in gardens (also known as peat moss) and as an absorbent material in products such as diapers. Because it often takes 100 years for a depth of 2.5 cm of peat to form in a wetland, it is considered to be a non-renewable resource just like coal, oil or natural gas.
The invasion of non-native species such as Eurasian water milfoil, phragmites and purple loosestrife threatens the health of our wetlands.
The natural reversible changes in wetlands may be almost insignificant compared to the disruption caused by human interference. Draining or filling in wetlands permanently destroys entire communities of plants and wildlife. Burning off or cutting down surrounding weeds, brush or other vegetation eliminates, at least temporarily, vital nesting places and escape cover. Building a highway through a coastal marsh or erecting a small dock at the marshy edge of a lake where you moor your rowboat is also damaging.
Air and water pollution are serious problems. Insecticides, weed killers and industrial wastes take a heavy toll on plants, fish and other wildlife.

This destruction is happening all across the country, as industry, commerce, agriculture and our appetite for "the good life" continue to swallow up our wetlands.