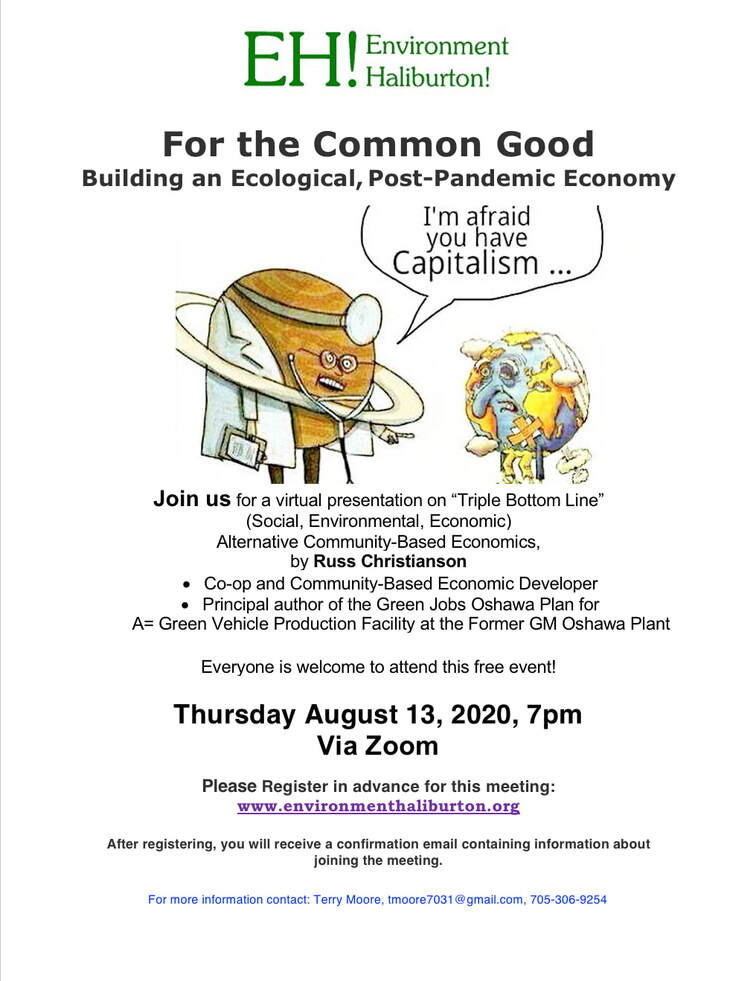 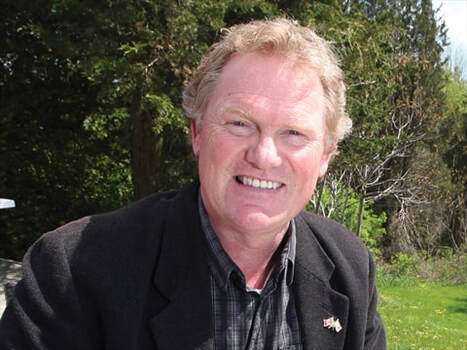 ​​The covid-19 pandemic has exposed the risks associated with our increasing dependence on global supply chains for everything from essential personal protective equipment (PPE) to critical food supplies. The shutting down of large segments of the economy has also pushed many small, local businesses to the brink of bankruptcy.

Are there other ways to organize our economy to reduce future vulnerabilities to pandemics and other disruptions while building local economies that privilege social and environmental values as much, if not more, than profit?

Our 2020 (Virtual) Summer Speaker event is meant to help start a conversation in Haliburton County about building a more resilient, ecologically-conscious, post-pandemic economy that works for everyone, not just Amazon.​

Please join us on August 13th at 7pm for a Zoom presentation by Russ Christianson, a well-respected  cooperative developer from Campbellford, Ontario, who has helped launch over two hundred co-operatives, with a seventy percent success rate.

Working together with the founders, Russ has helped launch over two hundred mission-driven co-operative businesses in a wide variety of sectors, including: food retail, processing and distribution; renewable energy; education; culture; construction; forestry; and travel. He has worked with consumer, producer, employee-owned, First Nations, student and multi-stakeholder co-operatives to help them improve their business operations and organizational governance.

Russ is the creator of the Cooperative Sustainability Scorecard, a practical tool that is used to map and evaluate organizations’ financial, social and ecological processes and metrics. In 2003, he received the Co-operative Spirit Award for Outstanding Contribution to the Ontario Co-operative Association.

As a volunteer in his own community, Russ was the founding President of the Campbellford / Seymour Community Foundation (https://cscf.ca) and the Aron Theatre Co-operative (https://www.arontheatre.com}.
​
Russ has a Masters of Industrial Relations (M.I.R.) from the University of Toronto and a Bachelor of Commerce (honours) from Queen’s University at Kingston. 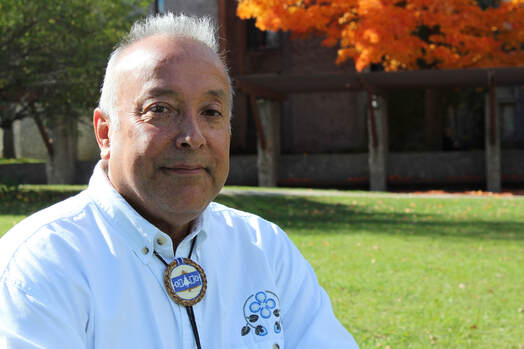 Dr. Dan Longboat
Roronhiakewen (He Clears the Sky)
​will speak about
A Way of Life: Indigenous Knowledge
to Sustain the World​

At the door on Saturday
​ 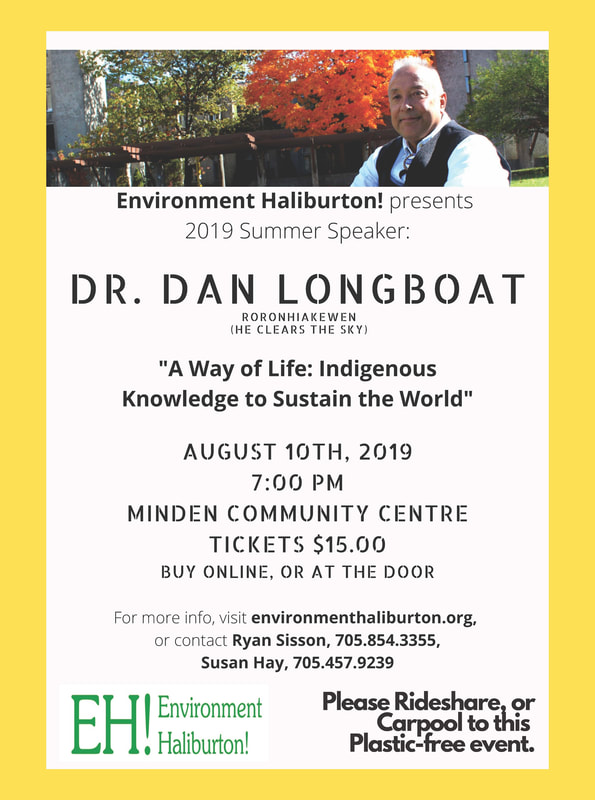 Dan is a Turtle Clan member of the Mohawk Nation and a citizen of the Rotinonshón:ni (Haudenosaunee - People of the Longhouse), originally from Ohsweken - the Six Nations community on the Grand River. Dan is an Associate Professor in the Chanie Wenjack School for Indigenous Studies at Trent University, founding Director of the Indigenous Environmental Science/Studies program (IESS) and acting Director of the newly formed Indigenous Environmental Institute (IEI).

He was also the first Director of Studies of Trent’s Indigenous Studies Ph.D. program. Dan designed and developed the IESS program - the first of its kind on Turtle Island. Granting both B.A. and B.Sc. degrees since 2009, the IESS program is an innovative and multidisciplinary undergraduate program that brings together principles of both Indigenous and Western (or neo-European/colonial) Knowledge systems for both Indigenous and non-Indigenous learners. It is based on a collaborative partnership between university departments. Unique IESS courses, along with courses in Indigenous Studies and Environmental Resource Studies and Sciences, form the curriculum.

Dan is celebrated for his Traditional Rotinonshón:ni Knowledge and embeds this into his teaching and in developing the IESS program ongoing. Dan also acts as a cultural advisor and instructor for several programs at the First Nations Technical Institute, Ryerson University and several Ontario universities and colleges. Dan is invited to share across Turtle Island and lectures and teaches on diverse topics including Indigenous environmental Knowledges and philosophy, Indigenous responses to environmental issues, interactive science and Indigenous Knowledge systems, Indigenous education, pedagogy and Indigenous ways of knowing as founded upon Indigenous languages and cultures, the recognition and resurgence of Traditional Indigenous lifeways and practices, human health and the environment, Traditional Indigenous foods and medicines, natural resource development and restoration, community sustainability, international Indigenous networks, the recognition of Treaty and Indigenous rights and understandings of the environmental and human impacts of colonialism. Dan stresses the importance of learning from Indigenous Elders and Knowledge Holders as the critical foundation for Indigenous identity, vision and life purpose. He creates links between Traditional Indigenous teachings and science and promotes using a “Good Mind” as part of our responsibilities in taking the collective actions needed to restore the Earth for the next seven generations.

Dr. Longboat has a B.A. from Trent University in Native Studies with a special interest in Human Psychology. Dan completed his M.E.S and Ph.D. in Environmental Studies at York University where his dissertation, The Haudenosaunee Archipelago: The Nature and Necessity of Bio-Cultural Restoration and Revitalization won the Faculty of Graduate Studies prize in 2009.
​
Selected Publications
Evering, B. & Longboat, D.R. (2013). An introduction to Indigenous environmental studies from principles into action. In Kulnieks, A., Longboat, D.R., & Young, K. (Eds.). (2013). Contemporary studies in environmental and Indigenous pedagogies: A curricula of stories and place. Rotterdam, Netherlands: Sense Publishers.
Kulnieks, A., Longboat, D.R. & Young, K. (2016). Engaging eco-hermeneutical methods: Integrating Indigenous and environmental curricula through an eco-justice-arts-informed pedagogy. AlterNative: An International Journal of Indigenous Peoples. 12 (1), 43-56.
Kulnieks, A., Longboat, D.R. & Young, K. (2017). Tramping the mobius: A curriculum of oral and literary tradition as a primer for rural education. Space and Culture. 21 (1), 60-71.
Longboat, D.R. (2014). A Haudenosaunee reflection on "seed: the power of life.” In Global Peace Initiative of Women. (Ed.). The sacred seed: A collection of essays. The Golden Sufi Center.
Sheridan, J. & Longboat, D.R. (2006). The Haudenosaunee imagination and the ecology of the sacred. Space and Culture, 9 (4), 365 – 381.
Sheridan, J. & Longboat, D.R. (2014). Walking back into creation: Environmental apartheid and the eternal – initiating an indigenous mind claim. Space and Culture, 17 (3), 308-324.
Selected Videos
2000 - At the Wood's Edge - Producer, Director: Dan Longboat Traditional Greetings Ceremony documentary
2017 - Indigenous Studies/Dan Longboat (3.29) This features Dan and has information on IESS courses.
2017 - Dan Longboat: A Way of Life: Indigenous Knowledge to Sustain the World (1.22.04) Dan shares teachings at Dalhousie University’s College of Sustainability in Halifax, NS with an introduction by Mi’kmaw Elder Albert Marshall.
2016 - Sustainability and Indigenous Understandings - Trent Talks (16.13) Dan expounds on Indigenous frameworks for making daily changes in the face of the current environmental issues we face.
2015 - Trent University: Centre for Teaching and Learning - Dan Longboat (4.52) Dan shares understandings of Indigenous Knowledge and pedagogies, Traditional teachings and the benefits of bringing Indigenous Knowledge systems into the academy. 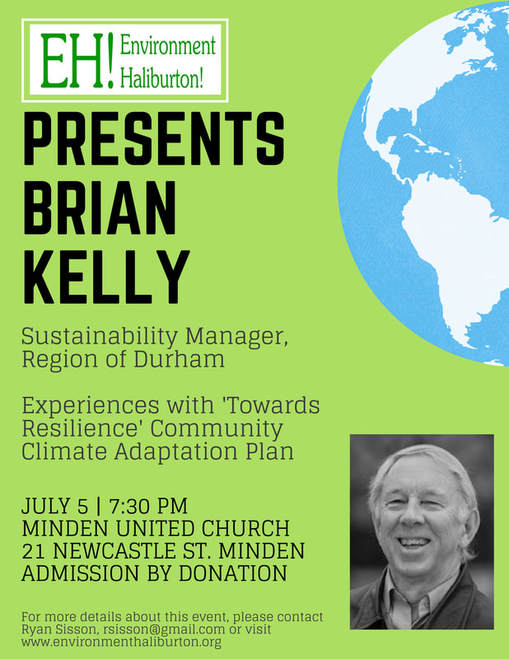 About Brian Kelly
Brian Kelly has been a ground-breaking innovator for all of his 47 years of practice in the field of environmental stewardship. His co-founding of Pollution Probe and subsequent efforts to reduce the level of phosphates in the Great Lakes in the 1960’s was reflected in the amendments to the Canada Water Act which resulted in a 50% reduction in Lakes Erie’s phosphate levels by 1975.
​
Brian led the development of the Renewable Energy Technologies Strategy and Program at Ontario Hydro – representing the utility at the World Business Council for Sustainable Development. He had a lead role in developing the Sustainable Development Strategy for the Ontario Roundtable on Environment and Economy and currently coordinates the Durham Region Roundtable on Climate Change.

​In February, the Region of Durham was chosen as one of nine recipients of the 2018 Federation of Canadian Municipalities (FCM) Sustainable Communities Awards. The Region won in the Climate Change category for the Durham Community Climate Adaptation Plan (DCCAP).

The DCCAP, Towards Resilience, addresses the local climate adaptation measures for the region, and is about protecting Durham from the changing global climate, and preparing Durham Region to cope with and respond to the increasing frequency and intensity of extreme weather events. A collaborative result of more than 60 experts from across the region, the plan positions Durham as a leader in climate adaptation in Canada.
For excellent coverage of Brian Kelly's talk, read Sue Tiffin's story in the Minden Times